The Gofuian calendar: a love letter to nerd devs

Sometimes, like tonight, when I want to worldbuild, I sit down not knowing what the hell to write about. At times it's overwhelming, trying to build an entire world out of nothing.

So instead of worldbuilding fun lore like I want to, I turn to my impending tabletop sessions for inspiration and see what I need to prepare for them. In today's case, I needed to write a letter that my players would find addressed to an NPC they fought. When I was writing the letter, I instinctively went to put a date at the top—and then I wondered what date I would put.

While I knew that months like “September” sure as hell didn't exist in my fantasy world, I've been loath to implement a calendar in my tabletop sessions that my players would have to learn. But I needed to put something down, so I turned to the calendar I had worked on in the past, based on the International Fixed Calendar: 365 days = 13 months of 28 days, + 1 special day at the end of the year. Pretty cool, right?

Right, I guess—but today, I thought: not cool, fuck the IFC! This is my world; I don't need to subscribe to your solar system and its weird agenda of years with 365.256 days. Why would I use that number?

In Paiat, we can have perfect years in which the time it takes Paiadrana (the planet) to orbit its star is perfectly divisible into days, or however years work. Since I wanted this calendar's years to be roughly comparable in total length to ours, I settled on ten months, each of 36 days. That's, you guessed it, 360 days. Now you can represent your calendar on a goddamn circle! And you can do the same thing with each month! It's a beautifully divisible number! Thanks, Babylon.

Unlike Babylon, each 36-day month is divided into six weeks, each of six days. Seeing a pattern? I chose this model because I've heard so much good stuff about base 12. Who needs 7-day weeks? We have too many moons to base months around, maybe. And while we're shortening the week, we'll have a three-day workweek with a three-day weekend! With 5 months (180 days) paid parental leave! And competitive wages!

So anyway, I'm having a grand old time figuring this calendar out, but it's quickly becoming more than my pea brain can handle. Enter the graceful Fantasy Calendar: a place to put it all. I don't remember where I first came across Fantasy Calendar, but I bought it that day because it is exactly what I've wanted for a long time. It's very easy to use, with a smooth UI, and it walks you through all the required things that your calendar needs to exist. So I created a new calendar, chose a name for it, named some weekdays (6), and named some months (10) and defined their length (36 days). And check it out: 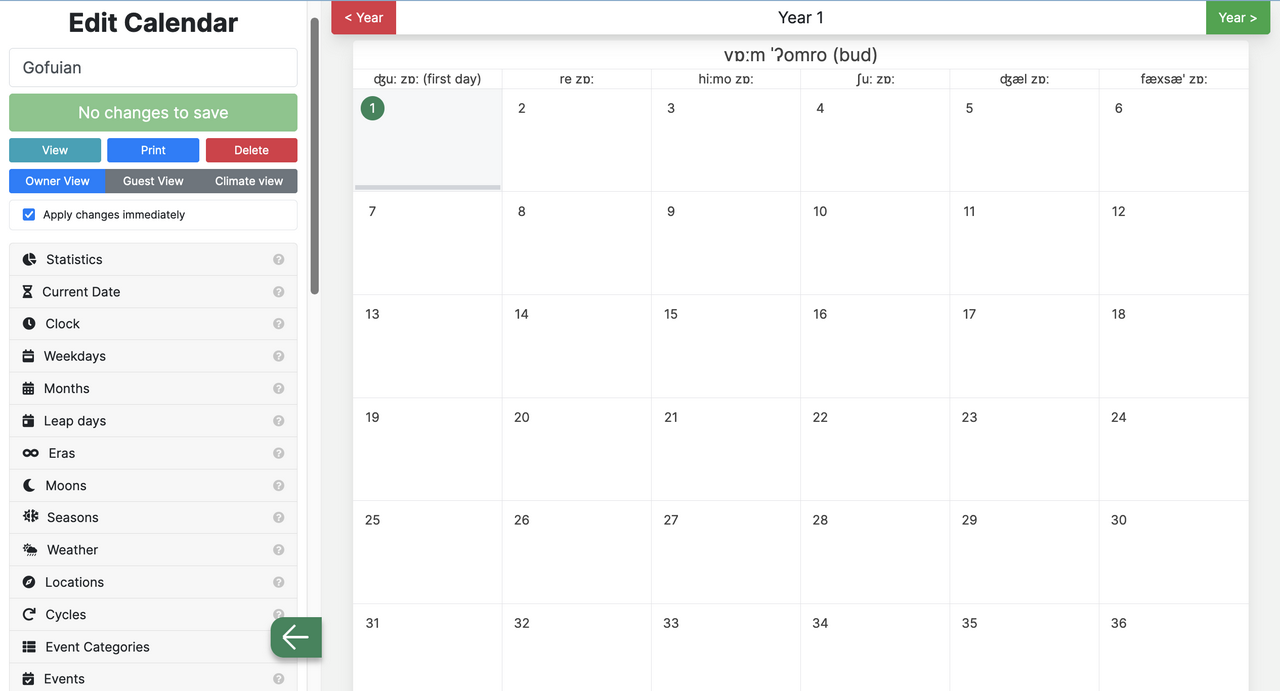 It took 2 minutes. Sorcery!! Burn the witch! (No actually, give them your money!) This is also before I even messed with seasons, eras, weather, locations, and events. FC has a ton of beautiful, flexible features.

Now, you may be wondering: Maxim, the calendar is chill and all, but what's up with all those funky words with the funky letters? Who's Gofuian?

Well, first of all, those funky letters are IPA characters; by reading them, anyone can know how pronounce them (but no, I don't know really know how to pronounce them). Second, those funky words are from the Gofuian language, which I created in—you guessed it—also two minutes, at Vulgar Lang. All I did was select the phonology I wanted to mimic (optional, but in this case I chose Persian) and hit the “generate language” button. Through some more sorcery, an entire language complete with pronunciation, grammar rules, and a 4000-word dictionary is generated in a matter of seconds. I don't understand it. 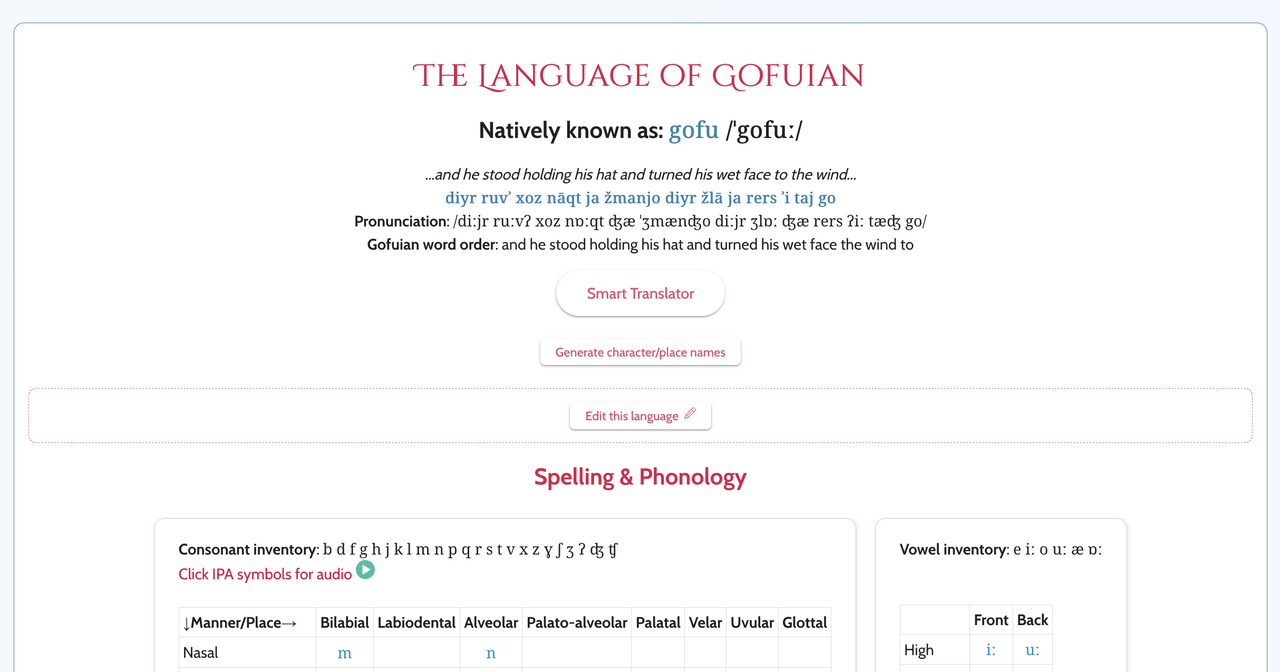 Look at that! There is all kinds of fun I have when I generate languages on this site, but from here on in this scenario, I decided to apply my language to the calendar. I first picked out names for the six weekdays, which I just named one-day, two-day, and so on. Then, I picked names for months, for which I decided I would pick names that matched seasonal phases of the year, beginning my year with springtime: bud, leaf, flower, nectar, cloud, gold, red, bare, blank, and peace. Then, I found the matching definitions in my Gofu dictionary and appended the Gofu word for month to each. Here's a table:

In doing all this, I noticed that the terminology of my months was specific mostly to plants—but, of course, different plants tend to bud, flower, and drop leaves at different times, so naming the months after these plant phases would be inconsistent. However, if the timing of the calendar was built around the seasonal cycle of a specific plant, that would make a lot more sense. And if such a plant was responsible for the nomenclature of an entire society's calendar, well then that plant must be pretty culturally, historically, and resourcefully important to the Gofu people! Suddenly, all because I wanted to put a date on a letter earlier, I had found my culture's bamboo or fig tree.

So I searched my dictionary for tree (/set/) and motherland (/ʃed/) and I stuck them together—now I'm dreaming up the significance of the šedset, the holy tree of Gofu. Like why do, according to my sixth and seven months, its leaves turn gold and then red? Earlier I had picked those colors for two months because I thought they sounded pretty and I didn't want to pick only one for autumn.

Maybe it's to do with the tree holding onto different nutrients for different reasons. Or maybe legends tell that it signifies the god Gruzus (/ˈgruːzuːs/—Gofu for “fertility”) growing and dying?

This is reading like a cheesy ad, but these programs have helped me build a lot of lore for my world. They give me tools that let me focus on other decisions—I don't need to do mental math for dates and I don't need to smash random consonants together until they sound cool to me (OK, I still do that). When I come up with an event, I can just put it on my calendar; when I need a name for something, I can consult my dictionary to choose associated words.

If you're into worldbuilding, I highly recommend checking out both Vulgar Lang and Fantasy Calendar. They both have substantial free versions, but they cost $20/lifetime and $25/year respectively, and my god they are beyond worth it. Support the devs!

Just in case you're wondering, neither of these teams/products know who I am —other than my name probably appearing in their billing!—and nobody asked me to write this. I just love them dearly and wanted to shout them out! <3 Thanks, devs!

If you have any questions or thoughts, sound off!